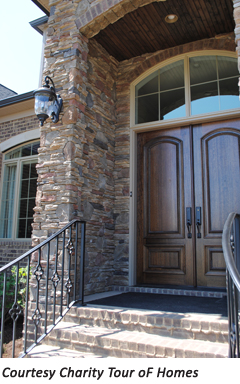 Metalworking is “one of the world’s oldest trades, dating back to the bronze age. To say ornamental ironwork is a timeless treasure is an understatement,” says Aaron Walker of David Patton Construction.

Metal railings were used in domestic buildings since the early 17th century. Due to the expansion of residential developments, and the continuing improvement in the techniques of iron production and treatment which contributed to the speed of manufacturing and the reduction of costs, ornamental ironwork has continued to grow in popularity ever since.

The ironwork products made possible by the remarkable wealth of skills and craftsmanship found among ironworkers have allowed architects and designers to complement their buildings with a broad array of both simple or elaborate ironwork features. “Customers are requesting custom metal balcony rails. These decorative rails offer a unique way to personalize the look of your home,” reports Robert Miles of Alabama Metal Art.

The ironwork was to become an intrinsic element found in Georgian and Victorian architectural styles. The functional purpose of railings was to mark property boundaries and provide security, according to historians. In addition, ironwork railings were used to prevent people from falling into basement light wells—a common feature of Georgian and Victorian buildings. Visually, railings provided additional decoration, usually in character with the classical style of that period. They emphasize the human scale of Georgian and Victorian homes and contribute to the uniform appearance of terraces, streets, and neighborhoods.

In residential areas of early British cities, the design and materials used for railings on the square were the same or similar to those used on the surrounding terraces. It was most common for the railing to be of cast iron, whereas gates were sometimes made of wrought iron. Gates also often utilized elaborate compositions of decorative foliage, classical motifs, and often included gilded features.

Very few squares where wrought iron was used on both railing and gates. For the Royal Parks, the designs of a grander scale and more decorative detail were used. Cast iron was commonly used for railing.

Remarking on the popularity of iron over wood in many applications, Walker says, “We are seeing a huge increase in iron over wood for most applications. We create railings, baluster, and handrails that could be considered works of art. There are limitless styles and designs to meet each customers request.” He mentions Jimmy Ralph of Ralph’s Welding as a Master Ornamental Iron Worker.

High-end ironwork continues to be in great demand, according to Walker, who points to its use in exterior and interior railings, in light fixtures, and elsewhere in residences. “For extra protection and to minimize future problems we can powder coat all ironworks,” reports Aaron Walker, allaying fears about maintenance of ironwork.

“Certain ornamental ironwork can add interest and variety to other decorative aspects of your home,” says Gail Adkins of Change Magic Interior Redesign. Ironwork may be used for decorative drapery rods and similar applications.

The vintage look of ironwork—its inherent strength, its promise of antiquity, and its aesthetic quality—”adds a richness and adds true value to the home,” according to Amanda Sweeney-Davis of Just Design This. “Iron adds ‘old world charm’ to any decor,” says Tara Johnson of Scarlett Designs. “Clients feel a sense of sophistication and history with this material added to their home,” she says.

“Ornamental iron return covers are one of the few ornamental iron projects that the homeowner can install themselves in about 15 minutes, says Cindy Moore of Fancy Vents.

So if you want to add value to your home or customize your remodeling project to suit your personal taste, consider adding a historic or modern touch with some ornamental ironwork.

There are a number of sources in the Greater Nashville area for decorative ironwork including: