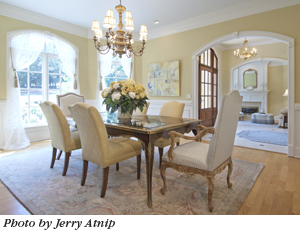 When Robin and Mark Tillman decided to redecorate their Governor’s Club home and complete an unfinished basement, they turned to Chris Carlisle of Chris Carlisle Interiors, a Franklin-area designer who arrived in Middle Tennessee from California a few years ago.

Mrs. Tillman says the couple always talked about eventually building a custom home and they moved into their dream home in 2003. “We poured over home design books and finally agreed I’d show him the home I liked best and he’d show me the home he liked best—and they were practically identical,” she says. 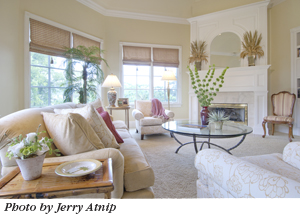 Armed with their favored plans, they retained N. Mitchell Barnett to serve as their architect and builder Will Forte of Forte Building Group to execute the design. “Mitch tweaked the plans a bit to create the ideal home and they worked seamlessly together to build our dream house,” says Mrs. Tillman. “I wouldn’t change a thing, and even today the house is everything we would want.”

While the home is traditional French in appearance on the exterior, it features some of the best in contemporary construction. Sitting on the 7th hole of the Governor’s Club golf course, the four-level home is built of wood and steel framing. The main rooms are designed in an octagon shape with lots of windows. It also includes some French architectural features within.

The home exterior is covered in 2.5 inches of genuine stucco to protect it from storms and stray golf balls, while the roof has 18 pitches to add to its beauty and serve as a challenge for the builder.
When the Tillmans were ready to tackle the basement, they also refreshed much of the rest of the house. “Chris was phenomenal,” says Mrs. Tillman. “Her ideas are just the best and I wouldn’t change a thing.” 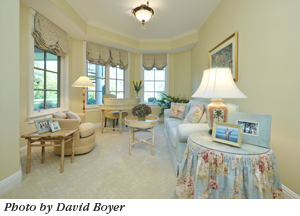 Downstairs, in addition to the media room, is a space furnished simply for just hanging out. Furnished with four comfortable chairs around a low table, the room was designed, at least in part, for the couple’s three daughters to spend time together. It is, Mrs. Tillman suggests, quite simply a gathering room.

Carlisle says her imperative was to create a casual, friendly, and elegant space that was also quite functional for the family, which today includes three adult daughters. She decorated the master bedroom as well as three other bedrooms, and incorporated sleeping space in Robin Tillman’s office in the form of a sleeper sofa. 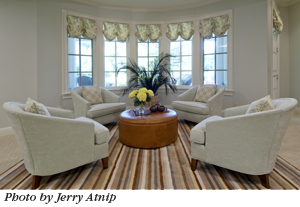 Mrs. Tillman’s preference for pale gold/yellows and blues is reflected throughout the home, which also reflects her love of light and light-hearted style throughout. Expressive of Florida and California elements, the home expresses what Carlisle says is the “comfort and style in paradise” feeling that Tommy Bahama uses to describe its fashion. It is those things and yet, as Mrs. Tillman says, traditional. “It’s uplifting and fresh,” she says.

Part of that thematic expression includes soft window treatment, and Carlisle says selecting floor coverings that flow throughout the home was among the challenges.

When the Tillmans asked Carlisle to help envision the roughed-in basement area as finished living space, she applied creative vision and designed a media room to accommodate adequate seating and a large screen television niche while giving the space the home’s signature light touches. 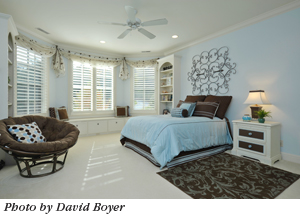 Mrs. Tillman’s original dining table serves as the focal point of the refreshed dining room where translucent panels accent the windows and art reflects the hues found throughout the home. An arrangement of hydrangeas created by Carlisle serves as the table’s centerpiece.

All new upholstered pieces chosen for their silhouettes and soft colors keep things simple in the living room which features a mixture of casual tables and foliage for a somewhat tropical impression.
In working with Carlisle, Mrs. Tillman says they essentially started fresh with colors, design, and furnishings. “And I just love the feel. Some day, when we decide to downsize, I want to capture this same feeling in a smaller home.