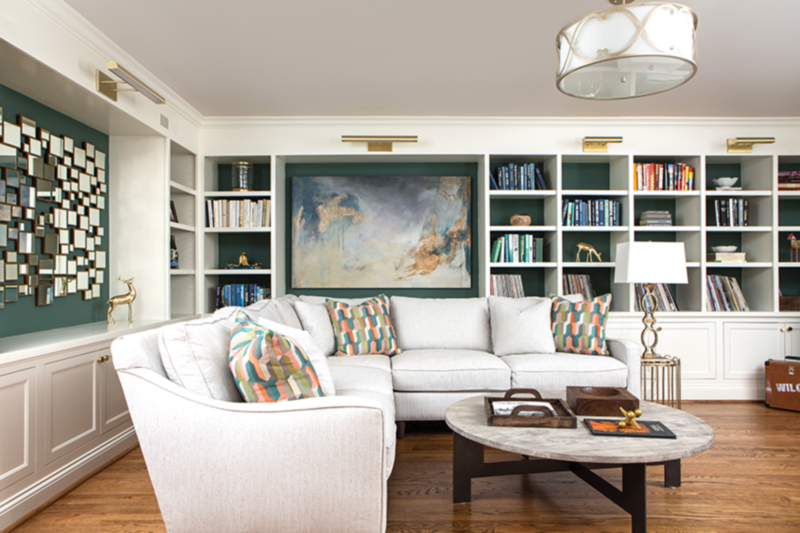 While gray remains popular as an interior paint color with some homeowners, others are shifting to greige, according to area designers. At the same time, designers report they are moving on from greige to shades of white and off-white.

Samantha Lewis of the Hoover Paint store reports, “White and greiges are trending as well as white and off-whites as the popularity of the ‘farm house style’ continues to dominate in this area.”

According to Kristie Banett of The Decorologist the trend in neutrals has indeed shifted toward white and off-white, as well as barely-there light grays and greiges. “These lighter neutrals are being painted high contrast accent colors of dark bules, greens, charcoals, and blacks,” she said.

Most designers agree that homeowners are seeking colors that create a feeling of peace in their homes, as opposed to “shaking things up” with bold colors. “I’d say the majority are seeking to maintain a peaceful feeling throughout the home using paint color as backdrop for more impactful design decisions,” says Lewis. She adds that while consumers remain interested in grays, the industry seems to be moving into warmer tones (the greiges). “We also see quite a bit of dusty aquas move through our stores as well,” she says.

Sara Ray of Sara Ray Interiors reports, “Today, the millennial generation is influencing design trends, so we are seeing a lot of fresh takes on colors from the 1980s and 1990s. such as blush pinks, teal, greens, and warmer tone neutrals.” She adds that “Popular paint colors for walls are warm whites and warm grays. We are seeing bold kitchen cabinet color trend, like dark teal, navy, and many different shades of green.”

Homeowners are asking for color, according to Bohnne Jones of Decorating Den Interiors. “Some do it through paint selections, and we are specifying less and less gray. If it isn’t time to paint, clients will go for color in their fabric fashions—draperies, pillows, and upholstery,” she says.

Jones says while gray is fading, the color solution depends on personal taste. “There are still people who want to have the crisp white trim against the contrast of gray walls. Blue is very popular and jewel tones—especially emerald—are making headway. Pinks are also very on trend,” she adds.

Accent walls can create a focal point in a room, especially one that has no architectural interest, says Jones. “We love wallpaper, as it is easier to change than perhaps putting stone or wood on your walls.”

When an accent wall is not done right, it can make a space look choppy or like an afterthought, according to Ray. “Some good locations for accent walls are bedroom headboard walls, bathroom vanity walls, bathroom tub walls, foyer/entry walls, and even the backside of kitchen islands,” she says.

Paint, wallpaper, or shiplap works great in bedrooms and entries, says Ray. “Fun bold tile works well in bathrooms. And shiplap or funky tile will offer a durable and stylish option on islands,” reports Ray. “Paint is often the most common accent application people gravitate toward, as it is the least expensive and easiest to change, but when designing we prefer materials that add color and texture.”

Agreeing that accent walls are a great way to experiment when it makes sense is Lewis. “An accent wall in a bedroom on the wall behind the headboard and focal walls in main spaces such as living room walls with fireplaces are among the most common spaces for experimentation,” she says. “For those who would rather not paint an accent wall, we find that spaces such as guest bedrooms, dining rooms, and powder rooms are ideal for experiementing with color, texture, and finish.”

Yoakum says some homeowners may accent a wall with paint or wallpaper, while others may choose wood walls for a natural feeling. “We also do tonal accent walls where we use moulding to create a design but paint it the same color as the walls,” she says.

“The only place I use ‘accent walls’ anymore is in bedrooms on the wall behind the bed,” says Barnett. “I use accent paint colors on ceilings, the backs of bookcases, in home office/libraries, and powder rooms instead.”

Sometimes called the “6th wall,” the ceiling is also gaining attention. “Too many people forget that they can do something interesting on their ceiling. When you understand the visual effects of different color values you can create a very special place,” says Jones.

“More and more clients are ready to paint their ceilings, but are terrified of making the wrong paint color choice, which is why they bring me in,” says Barnett. “And for walls clients seem to want more applied molding on the walls instead of more paint colors. Board and batten, shiplap, herringbone patterns—these are popular. Homeowners want more texture, rathter than more color for those applications.”

Reporting she gets a lot of requests to paint ceilings something other than white, Ray reports, “A dark color on a bedroom ceiling creates a cozy, intimate space. And in areas where wallpaper it utilized, finding a coordinating color to use on the ceiling or other walls can make a room feel more put together.”

According to Lewis, homeowners are using a limited color palette in a variety of ways. “They may use two or three colors in the home, but they are placing those colors on mutiple surfaces. The wall color in one room is the ceiling in the next. The cabinet color in the kitchen may be the trim and door color in the bathroom. Homeowners are expressing their creativity not necessarily in the multitude of colors they use in their homes but in the manner in which they choose to use them.”

Gilley reports she recently finished a project featuring pale blue ceilings accented with white beams, and in the same home the owners chose navy blue for the ceilings of their exterior porches.

Noting that homeowners seem to be more interested in introducing color on their ceilings because the color isn’t at eye level. “A lot of times we will paint a ceiling with a darker color or a bold color to play off other elements in the room,” says Yoakum. “We have done this with navy and natural stained wood recently.”

Commenting on “Color of the Year” options, Barnett says they are “not typically predictive of trends. The best pick for 2019 is PPG’s Night Watch. It’s the kind of moody, dramatic color I like to use for celings and coating trim, walls, and bookcases in libraries and home offices.”

For 2020, PPG has named Chinese Porcelain as it’s color of the year, describing it as a blend of cobalt and moody, ink blue that offers escapism. PPG reports its global color experts chose the color because it imparts calmness and restful sleep while offering the spirit of hopefulness.

Ray adds that Benjamin Moore’s Metropolitan Gray “is a good neutral for clients who want to add some warmth to their walls. It’s a great shade of sof warm grey. Night Watch by PPG is a bold teal that we’ve noted is on the forefront of cabinet color trends this year. Cavern Clay by Sherwin Williams will do well with the still trending eco-chic and bohemian styles. It’s reminiscent of natural terracotta clay and also plays on the blush/pink color trend.”

Lewis agrees that Metropolitan Gray has been increasingly popular as it already works well with the current trends.

Designers are split on what colors are most popular—some are all out for shades of navy and blue as the newest colors, while others report that greens are most popular. Barnett reports that hunter green and other green shades are finding favor with her clients, and Jones says emerald green is a new trend among her homeowners. Hunter green and other green shades are on Ray’s radar.

Debra Waters of Benchmark Realty agrees that green is popular, as homeowners seek to “bring the outside in” with grass green white, natural wood furnishings, and pops of splashy color to bind it together. “Think of a garden and have fun” are her words of advice.

Kate Goeringer of Brick Realty reports that jewel tones are very popular as pops of color throughout a home and on accent furniture, while Marybeth Duke of John M Green REALTORS LLC says her clients are leaning toward natural browns and tans.

Yoakum and Gilley say their homeowners are leaning toward navy and other blue shades and in agreement is Paula Cirulli of RealtyTrust Residential who says blue-leaning colors are finding favor with homeowners and are likely to join the mainstream in the months ahead.

Jones also reports that pink and blush shades are gaining popularity, while coral and other announced “colors of the year” are making their way into the home furnishings market.

There are a number of sources for paint in the greater Nashville area including: