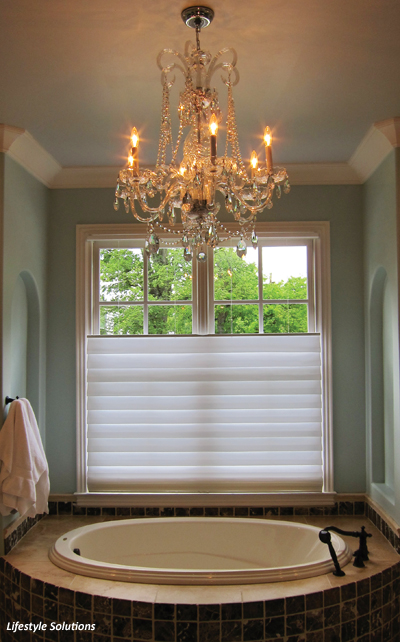 It’s all about simplicity, according to blind and shutter experts, who agree that it is the main desire expressed by homeowners when selecting window treatments.

And while they may select draperies in addition to blinds or shutters, homeowners first consider the basics.
Blinds or shutters? It seems that decision is a very personal one. Those who prefer shutters may chose them for the clean lines, easy maintenance, and the value they add to a home. Blinds and soft shades are the window covering of choice for many, according to the experts, especially those who prefer a contemporary look.

“Homeowners love that plantation shutters can stand alone without any other treatments,” says Kathy Case of Advantage Shutters. “They tie any space together with simple, clean lines, light and heat control, privacy, durability, and ease of cleaning. There are a lot of people who have a shutter on every window and door in their home with no other window coverings at all.

Case adds, “Of course, there are just as many people who may add to the shutter treatment in some of all of the rooms. We see fabric valances over kitchen shutters, custom drapery panels to add warmth to a nursery or child’s room, fabric to add a pop of color to a playroom or family room, and more elaborate window treatments in a dining, sitting, or music room. Lots of people who enjoy theater rooms add a blackout shade beneath their shutters or blackout draperies over their shutters.”

According to Gail Adkins of Change Magic, “My clients prefer the clean look of woven shades or shutters, sometimes combined with simple panels.”

Jones adds that fabric at the window, in the form of top treatments and stationary as well as operable draperies are returning as the go-to window dressing.”

Jones says she now offers a new 2-inch aluminum blind that’s available in fabulous metallic finishes that can be opened to a 4-inch view-through opening. “Made of 95% recyclable materials, they offer great clean-ability, are virtually indestructible, and add a hip feeling to any modern decor.”

Layering shades with drapery panels can lend itself to any style, be it contemporary or traditional, according to Lori Pruitt of Canyon Interior Design. “You can also use this combination in a casual or formal interior, and texture till enhance the look. You can also use this pairing to disguise windows that don’t have a great view or that don’t have the most attractive molding,” she says.

Ramcey Rodriguez of Lifestyle Solutions says his clients rarely combine treatments, with the exception of decorative side curtain panels. “Younger clients moving into Nashville prefer clean and modern. They gravitate toward solar shades, top-down, and bottom-up honeycomb shades, and woven woods. Many are asking for motorized shades that they can control with the iPhones, i-Pads, and Android devices. More traditional clients prefer Roman shades and shutters.”

Cathy Grayson of Ta-Dah Design says, “Shutters are the first stop in a design plan. With that base element the homeowner can take time with the design of soft treatments and room design.” She adds that gray and “spa” colors are still very popular. “Everyone wants a ‘non-fussy’ feeling in their home,” she says.

Hugh Cobb of Cobb Home Innovations, LLC,  says his company is a Lutron Shading Preferred System Provider with a full line of motorized window treatments including blinds, roller shades, and blackout shades. He adds that lighter colors—silvers and greys—are most popular and motorized is “the way to go,” according to Cobb.

Another possible window treatment is window film, which can be used with  or without blinds, shutters, or other treatments, according to Margaret Shrewsbury of Solar Insulation  Window Films. “Window film is a great option in areas where the homeowner would like to have an ‘open feel’ in a room. Window treatments can be left open while the window film protects furnishings and reduces heat loss or gain,” says Shrewsbury.

There are number of sources for blinds and shutters including: