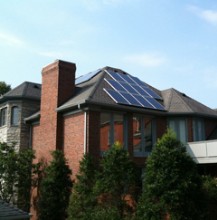 Energy savings and green energy are the buzz words of the year, if not the decade and perhaps the century. Today’s homeowners are just beginning to become aware of energy solutions designed to reduce energy bills and free them from their dependence on fuel sources outside the home.

“Every Middle Tennessean is concerned about the rising gas and electricity prices,” says Michael Conrad II of SolarTek Nashville.  “But not everybody knows they don’t have to be a slave to the energy company. All our products and services are designed to bring about energy savings through passive and active solar solutions,” he says.

As the cost of energy rises, anything homeowners can do to reduce consumption, improve efficiency, and/or generate their own power from
renewable sources should be considered, according to Brian Jansen of Forevergreen Solar.  “Solar power generates clean, renewable energy independent of fossil fuels,” says Jansen. “The cost of a solar system costs about what a new car costs and once it’s paid for the energy it produces is essentially free.”

Forevergreen specializes in turnkey custom-designed solar electric systems that are tied to the electric grid and involve the electric utility paying for each unit of energy the system produces.

Tips from Conrad for reducing energy consumption include good insulation (more than R-30), radiant barrier in the attic and as house wrap in new construction, and leave the southern facing roof unobstructed for solar panels “Remember the three foundational aspects of energy efficient homes: envelope, insulate, and ventilate,” he says.

National manufacturers of air conditioners and water heaters have also been working on products that can work with photovoltaic cells.  Such companies include Lennox and W.O. Smith.

Homeowners today are interested in making their homes affordable to operate in the long term, according to Josh Nash of Foamworkz, Inc.
Examples are high efficiency heating and air systems and better insulation systems, he says.

“By using spray foam you can create true thermal envelope for a home, which helps conserve conditioned air,” Nash says.   “Spray foam insulation has a higher R value than traditional insulation and it seals out dust, pollen, and other allergens, as well as keeping the home air tight,” Nash adds.

Geothermal heating and cooling systems are available from several area HVAC providers including Comfort Engineered Systems and
Precision Air. Tony LaFrenier of Precision Air says, “Geothermal is the superior efficiency heat pump, able to slice your air conditioning and heating cost by up to 70 percent.”

Relying on ground temperature to provide heating and cooling, geothermal equipment will last up to 25 years before needing replacement, while the ground loop can last more than 50 years, according to Comfort Engineered Systems.
An available 30 percent federal tax credit is available on various energy saving installations, including solar, wind, and geothermal systems.
An energy audit is the first step to making energy improvements to the  home. Pro Energy Consultants offers such audits, according to
Derek Pace.

Audits are also available through the Tennessee Valley Authority, and more information can be found at http://www.tva.gov or from your local power provider.

There are a number of sources for energy solutions in the Nashville area including: