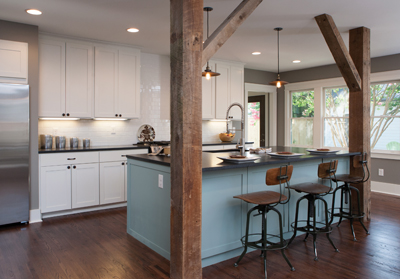 When Shane Stratton of Stratton Exteriors and Urban Properties bought the modest house in Lockeland Springs and “flipped” it last year, little did he know that the buyer was Michael Lohmann. Lohmann, director of photography for Nashville, the television show that many credits in part with Nashville’s rise as a popular destination spot for tourists and newcomers, and has used it as a set for the show. 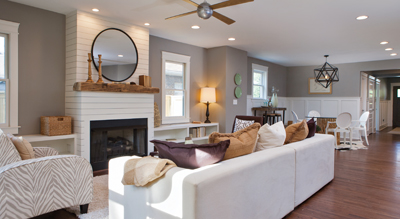 The house showed up in season three as the new house that Gunnar Scott moves into—the house where Micah’s grandparents arrive to announce their guardianship of the boy.

What was once a run-down duplex (note the second door to the front porch in the master bedroom) is now a beautifully remodeled single-family residence that appears on a national television show. 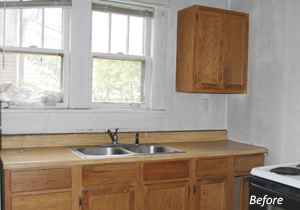 These images show the downtrodden house and the modern home Stratton created, from the contemporary living space and kitchen to the modern master bath, upstairs living space, and inviting outdoor space behind the home. 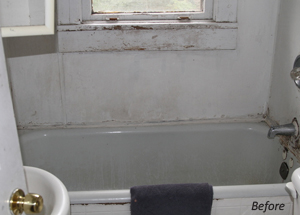 “Originally, the house was going to be my house—for my wife Paige, my daughter Isabella, and our dog Preston,” says Stratton. “So we did the house as though we were going to live in it, so we upgraded it left and right. A lot of thought—and basically, my personality—went into that house. We picked out all the lighting and fixtures. The lighting was all Restoration Hardware.” (There were, however, a few little subtle changes that Nashville made for the camera—one was to remove the Restoration Hardware fixture hanging above the dining room table. They swapped it for a smaller circular horizontal light, to show more of the room.) In the master bath, Stratton put in dual showerheads and upgraded to a reclaimed wood tile for the master bathroom floors and the accent wall. 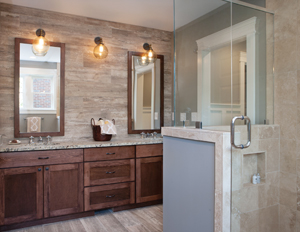 “In the kitchen, we put in posts for the show; they are 8X8 reclaimed wood posts, and the mantel is a 150-year-old piece of poplar. Those are actually some things I bought for Paige for Valentine’s Day, and then I took her over there and showed it to her,” Stratton says. “Of course, at the time, we still thought we would be the ones to live there. The island we did the way we wanted, too, with the sink right in the center. And the island was painted ‘Stratton Blue,’ a shade of paint by Benjamin Moore. We ended up using a dark granite countertop. And the layout was very open with a lot of windows in the back—this is the way architect David Baird drew it up, based on my wife’s request.” 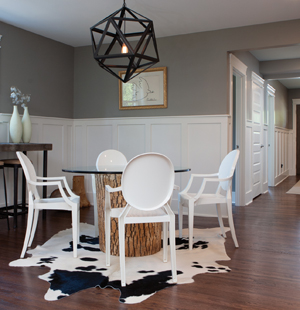 He adds that the layout of the Nashville house—in particular, the open kitchen with the adjoining living room with the white paneled fireplace and the nearby dining room—has wound its way into several other houses Urban Properties has done.

“It’s always a huge selling feature,” Stratton adds. “The fireplace, in particular, is really unique, as it’s clad in contemporary wood paneling that is really special. Shiplap and tongue and groove paneling are both back in a big way, but this is a different spin on that trend. Basically, we just stack these wood boards and leave a small space between each one. The effect is so pretty that we’re going to do an entire accent wall with this paneling on two of the houses we’re building now on McGavock Pike in East Nashville.”

Stratton says the kitchen—the way that it opens up is gorgeous—is definitely his favorite feature. “It’s a great house for entertaining,” he notes. 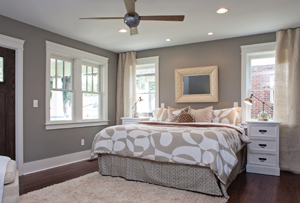 The flip took six months, in part due to working with the Metropolitan Historic Zoning Commission. “We had to get the plans just right. And it took a little bit longer to achieve the quality we did. We didn’t rush through anything. We took our time, and the home definitely shows it,” says Stratton.

The Nashville crew began filming and changing things at the house the day after closing. “And we started working on their modifications to what would be Gunnar’s studio the day they closed,” says Stratton. 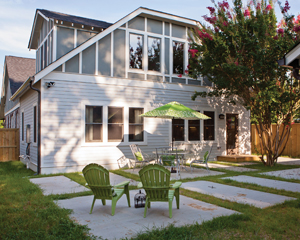 Speaking of his background and experience, Stratton says, “I had been remodeling houses for many years—mostly for Stratton Exteriors clients—but on a smaller scale. And I had undertaken a few flips for Urban Properties, but nothing this dramatic.

“It was unbelievably cool that something that I did that I was very proud of, from start to finish—and that was my first big project—turned out to be approved or recognized or even found by a national TV show. The Nashville people said they picked the house because of the quality of work we did. They loved the layout and the location and all of the selections we had made. 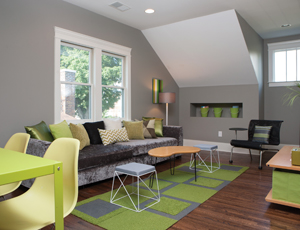 “This experience has been an affirmation, not only of my work on that one home but also an inspiration for subsequent projects. It’s taught me that if you put your heart into a home, good things will happen. Now I try to build or remodel all of my homes like I plan to move in afterward. I’m happier for it, and so are the people who buy my houses.”  strattonexteriors.com